The theme for International Women’s Day 2019 is #BalanceforBetter, and this is certainly an ideal we embrace at GK Strategy. We aim for a gender-balanced workplace, with currently 40% of employees being women, including over half the senior management team! We, therefore, see the incredible value that women add to our business every day. As well as businesses around the world. Indeed, after the Fearless Girl statue arrived outside London’s Stock Exchange earlier this week. State Street Global Advisors (SSGA), the asset management business who funded the statue, said research showed companies with gender diversity in their leadership teams outperformed those without it.

#BalanceforBetter is particularly important. So we also appreciate the amazing work the men in our office do too. We believe it is our collaboration that makes us even stronger.

But what we want to celebrate this International Women’s Day is the brilliant women who influence us. With this in mind, the women in the team discussed which women in politics they admire most. Specifically for their work towards gender equality. We narrowed this long list down to just 3, and some of our favourite quotes by them. 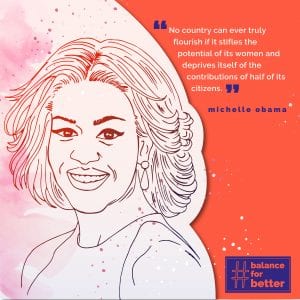 “No country can ever truly flourish if it stifles the potential of its women and deprives itself of the contributions of half of its citizens.”

We love this quote because it highlights the hard work that many women contribute to their countries and society in general. We also love that it comments on depriving itself of “half of its citizens” – we would also be set back if we didn’t get men’s contributions! Michelle Obama has long promoted the importance of hard work and education, particularly for women and girls. During and since her time as First Lady, she has visited the Elizabeth Garrett Anderson school for girls in East London a number of times, often talking about the importance of embracing your potential. 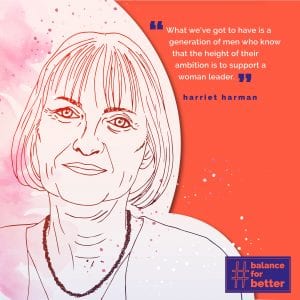 “What we’ve got to have is a generation of men who know that the height of their ambition is to support a woman leader.”

Harriet Harman is the UK’s longest serving female MP. Many people were disappointed when she didn’t run for the Labour leadership. However, this doesn’t mean to say that Harriet doesn’t believe the time is right for Labour to have its first female leader – as this quote shows, she believes that Labour needs a woman at its head when it chooses its next leader and believes men in the party should support this in the pursuit of balance. 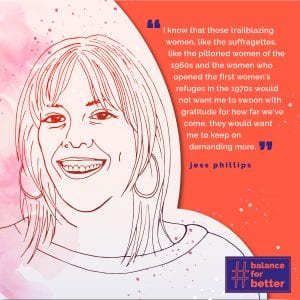 “I know that those trailblazing women, like the suffragettes, like the pilloried women of the 1960s and the women who opened the first women’s refuges in the 1970s would not want me to swoon with gratitude for how far we’ve come, they would want me to keep on demanding more.”

Jess Phillips, the Labour MP, is an outspoken feminist on the Women and Equalities Committee. We love this quote as she acknowledges that, although much progress has been made, balance has not quite been met. This is particularly important when considering women from minority groups. We think her motivation and drive to keep pushing forward is admirable.

What the Spending Review means for Health and Social care